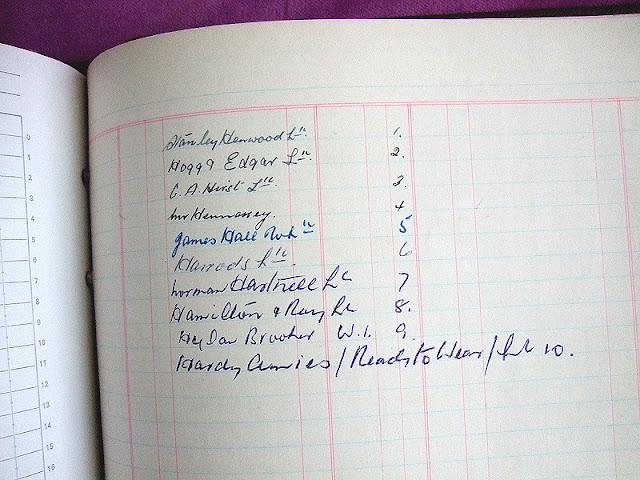 Here it is, my father's list of customers and under "H" Hardy Amies and Norman Hartnell, the twin kings of London Couture,  sadly he tore out the pages  with the actual order  history.

Amies worked for Lachasse and Worth setting up his own couture house in 1946 he dressed the Queen from 1948  and was knighted in 1989. He launched his ready to wear in 1950 and was famous for his understated tailoring and regal ballgowns. Hardy Amies

My father and Amies were exact contemporaries born  within a few miles of each other into  Edwardian London. I have no idea if they knew each other, but I do know that he would have dealt with the stock room as far as possible as he always said that was where the power lay. He depended on the lady whose job it was to source the buttons to suggest that he should be asked. He would also go to enormous lengths to supply the buttons in a way that made her job easier. Each set of buttons for each costume would be packed in its own tissue paper so the seamstress had a perfectly matching set.

He would  take the London orders round to the major houses himself so that he would be a familiar face in the stock room. However grand the customer, the stock room was always in the over crowded, rather grim basement, far from the upstairs glamour. I was rather affronted that  was where he took the buttons, I felt he was an upstairs man.
In the last days of Hardy Amies women's wear I supplied buttons from daddy's stock to them  just for old times sake and I suspect absolutely nothing had changed. I took the buttons to the stockroom buyer and she would see which of my choices the designer wanted, sometimes you saw the designer, other times you didn't, but essentially she was the all important go between.

Later the Hardy Amies' Design Director Jon Moore who had spent his whole career there left to set up his own couture house Jon Moore Ltd and I still work directly with him so the link continues even though the firm of Hardy Amies now only does menswear.